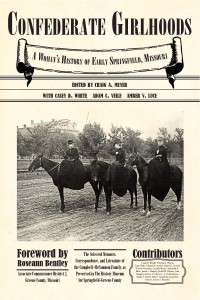 Confederate Girlhoods gathers materials from the Campbell-McCammon Collection, as preserved in The History Museum for Springfield-Greene County. One of Springfield, Missouri’s founding families, the Campbells were prodigious writers whose memoirs, correspondence, and fiction portray four generations of pioneer women. Focusing on writings from 1855 to 1905, Confederate Girlhoods presents these women’s view of Indians and early settling; of slavery and Southern patriotism; of war and its social, political, economic aftermath; of the railroad and Westward migration; of an Ozarks community’s early efforts at conservation and civic commemoration.

Confederate Girlhoods . . . is a treasure of historical significance, weaving the oft-told stories of America’s Civil War and its aftermath into a new pattern: as seen through the eyes of girls and women who lived through it. . . . I’m delighted that this record of local women’s voices has been preserved . . . and collected in this remarkable and important book.

Confederate Girlhoods makes an important contribution to the history of Springfield and the state of Missouri, as well as to gender history and the history of the American Civil War. The writings of the Campbell-McCammon family are both entertaining and revealing, and they have been expertly edited for this volume. This is a pleasure to read.

—William Garrett Piston, co-author of Portraits of Conflict: A Photographic History of Missouri in the Civil War