The Empire Rolls by Trudy Lewis 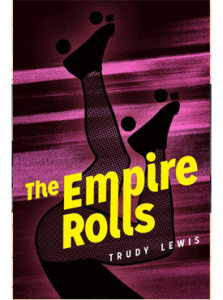 Here is what reviewers are saying about The Empire Rolls:

From the Kansas City Star

Ever since I became a serious reader about 50 years ago, I’ve been hearing opinions about “the great American novel.” Does such a novel exist? If so, is it Herman Melville’s “Moby Dick” or Mark Twain’s writings about Huckleberry Finn/Tom Sawyer or something else? We tried to answer that question at my blog over at https://abbyservices.com.

Less conversation occurs about “the great Missouri novel.” That said, I have read a few dozen novels set in Missouri. The newest, The Empire Rolls,   would certainly count as a strong candidate for masterfully capturing the soul of the state during contemporary times.

From the St. Louis Post-Dispatch

…anyone who can fill a roller derby team with skaters named Raven Pillage, Britney Spearhead and Annie Warhaul is obviously having a good time, and her enthusiasm shines through on almost every page. The jammers are out of the pack. Let’s roll.

From Scribbler,  the literary blog of the Central St. Louis Public Library

…this was the first paragraph of a novel by Trudy Lewis, a professor at the University of Missouri. All I knew was that I was instantly compelled by the voice–the intelligence and poise and wryness of it, the notes of sorrow underneath. That image of Sharee skating “backwards into her destiny” brought that Nabokovian chill at the base of the spine, and I felt the hair on my arms standing up. Here was something. I was sitting up in my chair, suddenly compelled by the sorcery of the right words in the right place on the page. I read The Empire Rolls straight through, with a deep sympathy for its protagonist, Sally LaChance, as she negotiates her way through midlife in a Midwestern town. It was a book that felt local and specific but never small, asking the big questions about ethics and community, our role in the world, the continuing encroachment of private interest onto the commons–while anchored in Sally’s laid-back but cutting, quietly moving voice.

Sally LaChance leads a double life. By day, she works as a park ranger in a midsized Missouri town. At night, she acts as emcee for the local roller derby team, the Boonslick Bombers, at the Empire Roller Rink. Sally loses her temper one day and pulls a gun on a group of polluters in Karst Park. Her boyfriend, a video artist, captures the moment on film and posts the footage to YouTube, putting Sally’s job, her relationships, and her life at risk.

Just before the financial crash of 2008, Sally LaChance must wind her way through the crumbling economy, a DIY skating corps, angry veterans, a slacker boyfriend, an evangelical mother, the war machine, and ever-encroaching private interests. The Empire Rolls captures the changing cultural landscape of the Midwest at a critical moment in his¬tory. The Empire Rolls. And it is rolling still.

Trudy Lewis is the author of the short story collection The Bones of Garbo, winner of the Sandstone Prize in Short Fiction, and author of the novel Private Correspondences, which won the William Goyen Prize. Lewis’s fiction has appeared in Atlantic Monthly, Best American Short Stories, Cimarron Review, Meridian, New England Review, Prairie Schooner, and other journals. She serves as the director of the creative writing program at the University of Missouri.